Yesterday I had the pleasure of seeing writer Polly Phokeev’s Seams at Summerworks Toronto. Directed by Mikaela Davies, the play starred Krystina Bojanowski (Ira), Clare Coutler (Old Frosya), Sochi Fried (Radya), Jesse La Vercombe (Anton), Caitlin Robson (Froysa), Elizabeth Stuart-Morris (Shura) and Ewa Wolniczek (Marina). Set in Moscow, 1939, the story revolves around a group of seamstresses (and one seamster) working for a theatre company in the time leading up to the war. While the show does explore the tensions of Communist Russia, and the fears of the approaching war, the play is essentially a personal memory piece, told through the older Frosya (Coulter) who is now living in Canada and spending her days reminiscing about the past. Their website states this nicely, so I’ll just quote that;

“Seams is a response to the inherited guilt and the chaos of identity that comes with being a Russian immigrant to Canada. It asks us to confront the cultural guilt we all inherit, regardless of where we come from, and whether we can find ways to overcome it.”

I was impressed with several aspects of the production. The first thing of note was the staging and design; as a period piece lover, I am often frustrated by the inaccuracies in sets and costumes of lower-budget productions. Seams however, was beautifully dressed, and with the exception of a couple pairs of rather modern shoes, everything looked beautiful and historically accurate. Bravo to designer Shannon Lea Doyle, her assistant Kelly Anderson, and installation designer Jackie McClelland (whom I have worked with before and am always impressed by).

The lighting design by Steve Vargo was also very effective. Simple, but powerful, it beautifully complemented the design and staging. Director Mikaela Davies accomplished something that I rarely see in this level of theatre; her staging was unique and memorable, but never completed with the work of her actors, and enhanced the piece rather than attempted to be the main focus. A couple moments were a little drawn out (I think of the random and a little cliched frantic wandering around the stage), but for the most part she succeeded in creating authentic moments and beautifully stylized tableau’s, in particular with the slow-motion movements of the young actors while Old Frosya spoke to the audience, and the (**SPOILER ALERT) flood of reporting papers that filled the stage in the final moment of the play. I have not heard of or seen Davies work before, but I will be sure to keep any eye out for her future productions.

There were no weak links in this cast. Some of the characters were better written than others, but each actor gave a committed and completely believable performance, with very natural pacing and authentic emotion. I think the script still requires some work, as the distribution of lines and scene time is a little off; some of the stories I wanted to learn more about were glazed over, while in a predictable fashion, the onstage love story was given more stage time than necessary. Still, every actor was given a chance to be featured in the spotlight, and the variety of characters was impressive. As Frosya, Caitlin Robson (who I had the pleasure of working with in Bygone Theatre’s, Rope) embodied the motherly, protective role of a character who I would have expected to be played by someone considerably older than herself. Through the knowing glances and ever-watchful eye of Robson’s character, it is clear there is more to her than she allows others to see, making the end, while still surprising, very believable. Other performances of note include Elizabeth Stuart-Morris as Shura, who’s larger-than-life character adds the majority of fun and laughs to the show, and Sochi Fried as Radya who certainly had the most realistic and tragic portrayal in the cast. 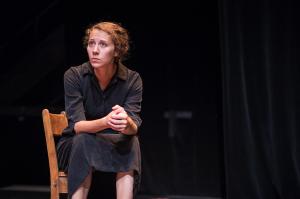 Again, the script could use some final tweaks, and I suspect the final product will be as much as 20 minutes shorter, but overall this was a strong production and one I look forward to seeing future incarnations of.

For tickets and more show information, check out the Seams Collective website.