If you haven’t tried to finance a show on your own before, chances are you have little to no idea how much it costs – and why would you? As an actor, you understand that money is needed for props, costumes, the venue, but chances are you don’t give much thought to the less glamourous expenses like insurance, printing fees, mileage fees, and small but essential purchases like batteries, notebooks and flashlights. If you’re only familiar with theatre as an audience member, you are likely even more removed, and may not consider how many hours goes into rehearsal for a show, and how much money it costs to rent a decent sized rehearsal space. Or the fact that your actors and crew need to be fed, need to be given print materials like scripts and dramaturgy notes; it all adds up. Fast. 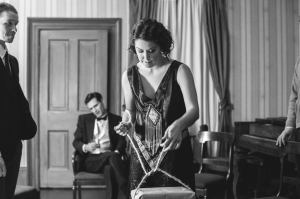 Rope was performed in November of 2015 with a budget of only about $3000. Before that, Dial M For Murder was produced with a budget just under $6000.

Currently I am working on a show that is headed to the NYC Fringe in a couple of weeks; Kill Sister, Kill! A Musical. While the show costs are pretty comparable to what I am used to raising for a Bygone Show, taking a group of 12 to New York City for 10 days, and hiring a professional band has nearly doubled the budget from what I’ve dealt with in the past. 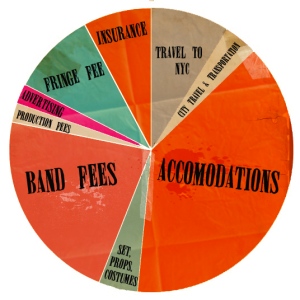 My handy-dandy pie chart clearly lays out where the majority of our costs are going.

To give you a basic idea of our costs for Kill Sister, Kill! A Musical, here are a list of the major expenses, also outlined in the above pie chart;

As you can see, the main expenses are our accommodations and the band. We managed to secure sponsorship from Pointe Plaza Hotel and got a great deal – 12 people staying for 10 days in a great area in Brooklyn – but it’s still a large amount overall. Likewise, the band is playing for a ridiculously low rate – we scored 4 professional NYC performers (plus our own Michael Zahorak, who is also the musical director) whose experience includes Broadway shows & national tours. For the talent we’re getting for 5 shows, it’s a very reasonable rate, but again, it adds up fast. 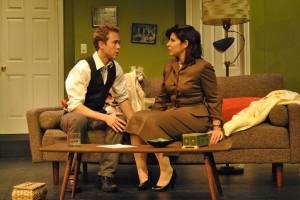 Renting out a professional theatre and building flats for Dial M For Murder were major costs.

You may have noticed some of the above expenses are quite low, like, ridiculously low. Bygone’s previous shows usually have a costume budget of $500-$800 and that’s for a small cast. Props, as well, would generally be at least $300, and I’ve spent as much as $2000 on a set. However, there are a few things that make this show a little different; with a 15 minute set-up and strike time, our set needs to be minimal – no flats for us! Costumes are a bit less expensive as it’s easier to find cheap 70s looks than it is to say, find flapper dresses. Finally, with all categories, we are making a real effort to borrow EVERYTHING. At long last, my massive prop/costume collection is paying off! It pays as well to have friends in theatre, as all of us are working to source things for free.

Advertising as well is very low. We managed to get all our posters & postcards printed for under $100, and the remaining money will be used to make some buttons and to likely get a Facebook or other online ad. The benefit of living in this social-media-obsessed time is that there are lots of methods of free advertising out there; problem is, they all take considerably more time than traditional methods (mailings, newspaper listings, etc) do, which means more work for us on the production team.

I haven’t included on this budget some basic things like rehearsal space, printing costs, food, parking etc. because when doing a fundraising campaign I don’t think it’s necessary to outline every expense. Here I stuck to the major ones everyone is familiar with, but trust me, if you go through my producer notes you will see every cent accounted for, detailed potential revenue reports and a tracking sheet for all our receipts. I do daily updates to the budget and it’s essential that I keep on track of every expense, no matter how minor, because it is very easy to let things get off track.

For our countless hours of work we are about 47% of the way there.

So how are we doing so far? Well we’ve had some very generous donors, and have gotten gifts-in-kind from several local companies which has helped keep costs low. We hosted 2 fundraisers (Retro Radio Hour – Sin & Sensation and Fuck This City) and continue to push every day to spread the word and secure more donations. For our countless hours of work we are about 47% of the way there; if we raise another $2000 – $2500 we are unlikely to lose any money on the show, if we raise another $4000 we stand a chance of making a profit, and that means being able to pay the cast and crew.

So this is where the selfish part of the post comes in; we need your help. I personally have been working on this show since October, and for the past couple months have been spending 30-40 hours a week (on top of my two jobs) on the show, doing anything from poster design to budgets, marketing to rehearsal scheduling and much more. Our crew includes Michael Zahorak, the composer/music director (who hasn’t slept in days), Lyricist David Backshell (who has stayed up many sleepless nights to work with Mike), Associate Producer Tea Nguyen (who joined the tame late but was immediately thrown into the lion’s den) and writer’s Drac & Jamieson Child (Jamie is also directing, and so spends his evenings in rehearsals and his days perfecting the script). The cast has a tight rehearsal schedule so they too have nearly full-time hours, and again, none of us are getting paid.

A career in the arts is a hard thing to begin, and an even harder thing to maintain. While some may look at a show like this and say “well, they want to do it, they need to pay for it, it’s just fun, isn’t it?”, that couldn’t be farther from the truth. Sure there are fun moments, but ultimately when you work in theatre you have resigned yourself to working 80 hour weeks for little to no pay, and to over and over be putting all your heart and soul into something that will be judged by total strangers. It’s exhausting. And stressful. And yes we love it but it really can be hard. But you can help make it a bit easier, and in doing so help to launch the careers of the 12+ young artists who are involved.

If you would like to make a donation, visit our website or indiegogo campaign. We have a bunch of wicked perks available to those who donate, and again, you’ll be helping to support the efforts of a large group of artists. If you are unable to make a donation, please consider sharing this post, or the links to our donation pages – getting the word out is important, and the more people who help spread the news the better chance we will have at success.

Thanks for getting this far, all for now.