I get a kick out of little details in things, which is why I often spend too much time on small prop details that likely won’t be noticed by anyone but myself. Today’s example? The certified cheque prop needed for Bygone Theatre’s upcoming production of His Girl Friday.

Really, it’s a pretty simple one, and since we’re seeing the cheque before it’s cashed, I’m not going to the trouble of embossing it, I did however want something from around the right date, and double-sided.

Since this show will be on a real stage, and not something that requires the same accuracy as was needed for shows like Rope, which practically happened in the audience’s lap, I just searched for 1930s or 1940s certified cheques and settled on one from 1933;

I found this through a memorabilia site – it works great as it doesn’t have a big distracting logo, its from around the right time, the right place, and has the fun added detail of being signed by a Walter (it comes from our character, Walter Burns). Again, chances are none of these details will be seen on stage, but still fun to note. I did want it double-sided, so that took a very small amount of photoshopping, about 3 minutes worth.

I opened the image in photoshop, and then selected the general colour using the eye dropper tool. Then, I did a new “fill layer” (Layer > New Fill Layer > Solid Colour) so that I had a solidly coloured piece the same size as my cheque. The original image had a speckled appearance, so to do that I simply applied a filter (Filter > Filter Gallery > Reticulation).

I chose the “reticulation” filter because, after browsing through a few like “film grain”and trying the “dust and scratches” one, I thought this looked the closest to what the front of the image looked like. So, voila! The back of my cheque.

I’m sure there are other (better?) ways to do this, but as I wanted to print quickly I just dragged both the front & back images into Word to print. I did 3 on a page (these will be for rehearsal, for the show I will of course have one for each performance, plus a couple back-ups), and since they are the same size just placed them in the same spots on 2 sheets. 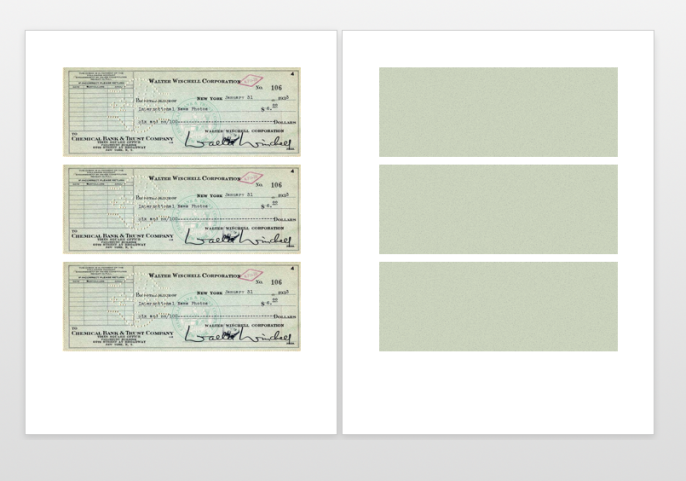 Then printed double-sided and there you go! Quick, easy, and I think certainly worth the few extra minutes to get something that isn’t white (and super-fake looking, imo) on one side.

One thought on “Cheque, please!”