Bygone Theatre’s Holiday Auction is just around the corner! We’ve got something for everyone, with some bids starting as low as $5. Wide range of items including theatre tickets to shows produced by Buddies in Bad Times, Scarborough Music Theatre, Hart House Theatre, Crow’s Theatre and Mysteriously Yours Dinner Theatre; vintage items from Tucked Away Antiques like signed photos of classic Hollywood stars and vintage movie posters; charming themed gift baskets; getaway packages to New York, Tuscany and Sonoma, and much more!

Proceeds go towards our upcoming production of His Girl Friday, running March 2-5, 2017. This is a big show with a big cast – 18 actors! – and so we have a lot of work to do. Help support local theatre while doing  your Christmas shopping from the comfort of your own home! Auction runs online from 9:00am Thursday December 8th to 2pm…

Now accepting audition applications for my next show with Bygone – His Girl Friday!

Bygone Theatre is holding auditions for its March production of HIS GIRL FRIDAY, running March 2-5, 2017. Directed by Emily Dix.

This is a non-union, profit-share production.

SYNOPSIS
This iconic screwball comedy tells the tale of Walter Burns, a hard-boiled newspaper editor who learns that his ex-wife, “newspaper man” Hildy Johnson, is going to give-up reporting to marry a bland insurance salesman from Albany. Determined to sabotage these plans and keep Hildy with the paper (and himself), Burns convinces her to cover one last story; the execution of cop-killer Earl Williams. Things quickly spiral out of control and Burns and Hildy find themselves tangled…

While His Girl Friday won’t open for another 4 months I’m already busy prepping things on the production side. The budgets are set, fundraising & marketing scheduled, so now I get a little time to spend on one of my favourite parts of putting together a show (and part of why I started Bygone in the first place); designing.

We chose to produce Rope as a site-specific play at the Gibson House museum.

The period-authentic, intimate space, along with our props and costumes, helped the audience feel as though they were in the story.

Anyone who’s seen a Bygone Theatre production knows that we always do things set in the 20th century, and while there are of course budgetary restraints that don’t make 100% accuracy possible, I do work hard to get an authentic period feel to our shows, both with props and costumes, and when possible, set.

In Wait Until Dark, we found mid century kitchen appliances to give an authentic feel.

The story takes place in a basement apartment, so we chose an industrial, unfinished-type space to enhance the set.

His Girl Friday is set in 1940 and takes place primarily in a newspaper office, which means that I have to find a lot of period office supplies. The good thing is, since it’s an office (as opposed to, say, the house of a trendy socialite), I can play with the time period a bit; supplies from the 30s or even 20s could easily still be showing up, as long as they do have modern necessities like typewriters and phones. So let’s start with the most basic part of an office…

There’s a few key styles of desk you will come across if researching those from the first half of the twentieth century; secretary desks, rolltop desks, typewriter desks and tanker desk.

The secretary desk is the oldest style in this list, and despite its name, would not be very useful for most secretaries, as it forces the user to sit staring into a bookshelf, rather than outward towards visitors. The base is made with wide drawers which have above them a hinged desktop surface, allowing it to be opened when a writing surface is needed, or closed to save space and protect documents when it is not. The top half of the desk features a bookcase – sometimes with some drawers – often covered by glass. All-on-all the secretary is a tall, heavy piece of furniture with a shallow depth. Once again, not very practical for a modern office, certainly not a shared space.

A later version of the secretary desk, note the shorter bookcase. This could be more appropriate on our set.

The rolltop desk was a staple of the turn of the (20th) century office. First designed in the late 1800s, it became popular throughout the end of the Victorian era as it was quite easily mass produced. Its signature element is the roll down top, wooden slats on a tambour that allowed the user to cover the desktop and drawers. While practical for a small office with minimal correspondence, the desks grew out of favour as large elements such as the typewriter required more desk space, and the small drawers and compartments grew unusable due to an increased volume of paper (again, thanks to mass production). 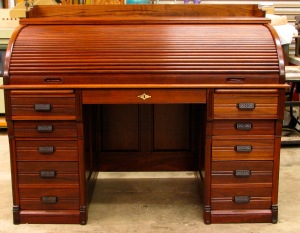 Rolltop desk with the tambour pulled down.

One of the modern marvels becoming appearing in turn of the century offices was the typewriter (I’ll go into more details on those later), and with that came the necessity for a new type of desk. Just as you would today want to have a different desk for your computer than say, writing or sewing, workers then found they needed something not only lower (for ease of typing) but sturdier than the hinged tops commonly used before; typewriters were heavy and required hard pounding on the keys. In addition to that, early typewriters were finicky and expensive, so it was important to keep them covered and safe from dirt and dust. Many initially considered them an eyesore as well, so the cover had an aesthetic value too.

While dated, this is a good size for the secretary, just room enough for her typewriter and phone.

A slightly more modern typewriter desk, which can easily be converted back to a basic writing desk; perfect look for His Girl Friday.

1946 saw the introduction of the Tanker Desk, a new form of the pedestal desk made of steel, with a sheet metal surface. These utilitarian style desks were popular in institutions such as schools and government offices, and have a distinctly retro feel. They remained popular until the 1970s, and are often sought after now for a “industrial” look. However, as I mentioned previously, this show is set in 1940, so these are a little too modern. Plus, they are expensive and heavy; not a great choice for a show.

A gorgeous but (for our purposes) impractical tanker desk.

So what to use? Before even doing any research I knew I preferred the look of wood desks to wooden, and I knew I would need some that could support a typewriter. This play also calls for a rolltop desk. Given that we have a budget to stick to, and keeping in mind how difficult these can be to move and store, my plan is to get a larger, slightly older desk for Walter Burns (the editor) to have in his private office, and to use a small typewriter desk for his secretary. 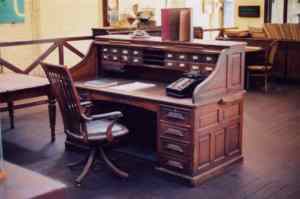 While dated, this is a good size for the secretary, just room enough for her typewriter and phone.

The reporters will likely share a large table with just their own phone and small work station, and the back of the office will have a few older desks set aside, including our necessary rolltop desk. I’ll post photos when we have them all purchased, but for now, here’s an idea of what I’m looking for;

Photo of the New York Times, 1946. Desks pushed together – might achieve this feel more cheaply by using a large table.