The past few months have flown by, but May especially has been a whirlwind.

At the start of 2015 I began my job at Theatre 20, and after a month or two working part-time and doing the odd task I was given a full-time position as their producer. The organization is currently structured as follows; Brian Goldenberg (who I work alongside) as the Executive Director, David Keeley as Artistic Director and Nora McClelland as Associate Artistic Director – then comes me as Producer. Being a non-profit we have a board with 13 or 14 members, and then there’s a host of interns/volunteers & a new summer student. Big company, relatively small staff. 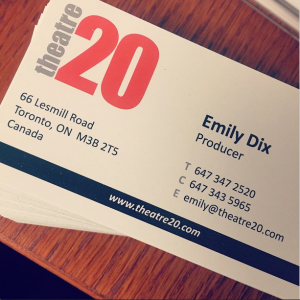 I’ve been keeping busy at the office doing anything from updating our new fundraising software, eTapestry (which, as nerdy as this will sound, is very cool. Basically a really detailed & targeted way to track donors, ticket sales & grants), to updating their website, initiating a monthly newsletter, and working on getting things together for all of our projects for the coming season (can’t give details on that yet, join us for our Season Launch June 8th!). It’s nice to, after years of doing arts admin stuff for no pay, be able to say that no, I don’t have a ‘Joe Job’, what I do to pay the bills is produce theatre. Pretty nifty 🙂

Alongside that I am still doing my work for the Social Capital Theatre, which I am happy to say keeps me busier than expected because they’ve been getting so many bookings. There’s nearly constantly a show going on and then they’ve got the rehearsal space across the street, and the classes they run every couple months; for their first year, they’re doing a pretty incredible job at filling the place up. Their One Year Anniversary party is coming up soon, which should be fun.

Then of course there’s Kill Sister, Kill! which I am producing through Bygone Theatre alongside Drac & Jamieson Child, and our composer Mike Zahorak. The show got into the NYC Fringe so we have a lot of planning and prep to do before August; get all the forms in, find an ACR from New York, finish the script and score, set up a fundraiser, cast, book accommodations in NYC – it goes on and on. I’m pretty swamped with this stuff but I loved it there last year so I’m excited to have an excuse to visit the city again in a few months, even if it’s only for 10 days. Met some great people last year who I hope to see again, and I’m sure I’ll meet many more. 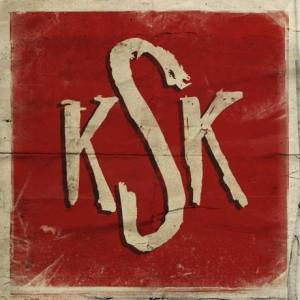 I also recently acquired rights for what I’m thinking will be Bygone’s next show, but right now I’m trying to figure out if I will have time to get everything together for an October run; when I made the tentative schedule for it back when I applied, I was going to be having rehearsals start in August, and being out of the city may put a damper on that 😛 Oh yeah! And there’s was Bygone’s Retro Radio Hour – Spring Fling; those are always fun, we had some new voices up there and a great response yet again. I’ve got ideas for the next few, just need to find time to book a venue!

On the personal front, some of you may know that I recently moved back into the city after a year & a bit being stuck in the wasteland that is Brampton (I’m sorry Bramptonites, but there was just nothing for me to do out there). I’m back in my old building and it’s great to be able to go out when I want, be home from work by 6pm as opposed to 9pm, and to be able to stroll around the city in the nice weather. I saw Ballad of the Burning Star yesterday (more on that soon) and took the long scenic route to the theatre, sticking to side streets as I headed from Lansdowne & Dupont to the Theatre Centre on Queen near Dovercourt; I couldn’t believe how many streets I had been past but never down before! It really is a beautiful city, and I feel connected to everything here in a way I never did in KW where I grew up. Bloody expensive, yes, but I guess I’ll just have to become a ‘Big-Shot Broadway Producer’ to deal with that :-p

Time to head out to work, sorry for the less-than-poetic entry but I’ve been so busy I barely have time to remember all that I’m doing, let alone write anything insightful about it. More of that to come once things slow down a bit.

Well, I’m not exactly leaving today, but the work has certainly started already! Happy to announce that the show I’ve been quietly working on since October has been accepted to the NYC Fringe! That’s right, Kill Sister, Kill! is headed to the New York International Fringe Festival this August!

I attended the Fringe last summer and was immediately hooked & eager to return with a show of my own. I was lucky enough to meet Jamieson Child when I directed Rope in the fall, and when he told me about the show he wrote with his brother Drac, I thought it would be the perfect fit. The brothers & I have been slowing expanding the book & have recently brought on a new composer, Mike Zahorak, to give the show the gritty 70’s feel we felt it was lacking. I’m producing the musical through Bygone Theatre, along with their company, Kid Switchblade Productions.

It’s going to be a busy few months but I’m totally pumped, and will keep posting details as often as I can. For now, check out the FB group for show updates.

The last two days saw the opening & closing of the Toronto Premiere of 35mm: A Musical Exhibition, a show for which I was the associate producer. Despite the very short run time, a lot of time & energy went into the show, on everyone’s part, and so while the build-up may have been less than I usually feel for one of my shows, the post-show crash, the feelings of “oh my god, what do I do now??? I need a new project!!!” are still there.

The play was a one-act musical by NYC composer Ryan Scott Oliver, and this production was directed by Melissa-Jane “MJ” Shaw, with music direction by Chris Tsujiuchi. Adrian Marchuk both produced and performed in the piece, and my Theatre 20 colleague Brian Goldenberg was the consulting producer.

The show doesn’t exactly have a plot…everything is loosely tied together with the words “Hold. Still. Focus.”, and there is an over-arching theme of relationships, love & loss, and the concept of photos and their place in modern day society. There was virtually no set, and very minimal props. The show relied on some simple but effective lighting changes, and the brilliant vocals by the cast of talented performers.

It’s always nice to see a show of this calibre, as there are no weak links; the band was spot-on, and while there were songs that I liked more than others, each singer had their chance to shine with a number of their own.

Jeigh Madjus wowed us with his incredible rock vocals in the opening number, and showed us a softer side with the beautiful ballad, “Cut You A Piece” late in the show. Michael Esposito II similarly shone in 2 completely different numbers; the quirky & creepy “Caralee” and the touching “The Seraph”, showcasing an impressive range of vocal styles & emotion. Adrian Marchuk was equally loveable in the darkly comic, melodramatic “Good Lady” (where he rocked a cloak & crown) as he was in one of my personal favourites, “Make Me Happy”, a feel-good, upbeat duet with Kelly Holiff. Holiff’s show-stopping number, however, has got to be “Leave Luanne”, a chilling country-style number about an abused & eventually murdered woman, that goes from a fairly typical song of hurt & heartache into an eerie ghost story. Backed up by the full cast, Holiff’s gut-wrenching emotion in this number gave me shivers, and when the entire cast began stomping to the beat & belting out the words you couldn’t help but feel shaken. Finally, Marisa Mcintyre beautifully displayed the light & dark sides of teenage love, angst and obsession. In “Monday” she plays a bubbly girl obsessed with a boy who nearly ignores her, telling her that she is “cute but juvenile”; the bright, poppy energy had me grinning and wanting to sing along. On the darker side, Mcintyre wraps up the show with the twisted number, “The Ballad of Sara Berry”, about a wannabe prom queen who kills off her competition. Funny, edgy, and perfectly performed this was another one of my favourites.

It’s too bad it was such a short run; I’ve been listening to the original cast recording, and I can honestly say, without bias, that this group performed it better. Here’s hoping my path will cross with all of theirs again sometime soon. For now, it’s time to move on to the next show!